Three quarters of all alcohol consumed in Wales is drunk by less than a quarter of the adult population who are hazardous or harmful drinkers and spend up to £2,882 per year on booze, research has revealed.

A report looking into the potential impact of minimum unit pricing and taxation policies in Wales was published Thursday 22nd February by the Sheffield Alcohol Research Group at the University of Sheffield.

The publication, which found that the 3% of the population who are harmful drinkers, account for 27% of all alcohol consumed, comes after the Welsh Government announced a new Bill that, if agreed by the National Assembly, will introduce a minimum price for the sale of alcohol.

The Bill, which is designed to reduce hazardous and harmful drinking would make it an offence for alcohol to be supplied below that price. 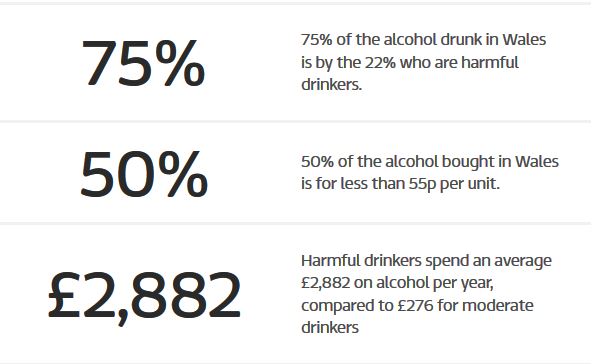 “The introduction of a minimum unit price would be effective in reducing alcohol consumption among these groups, as well as reducing the number of alcohol-related deaths and hospitalisations.”

The availability of cheap, strong alcohol is estimated to lead to 50,000 alcohol-related hospital admissions a year, costing the Welsh NHS £120 million annually and, in 2015, there were 463 alcohol-related deaths in Wales.

Mr Gething said: “The report shows the greatest impact of a minimum unit price would be on the most deprived harmful drinkers, while moderate drinkers would experience only small impacts on their alcohol consumption and spending.

“This is because moderate drinkers tend to buy alcohol which would be subject to little or no increase in price under the policy.

“If passed, this law will potentially save lives.”

The research also shows harmful drinkers spend an average £2,882 a year on alcohol, or around £7.80 per day, compared to £1,209 for hazardous drinkers and £276 for moderate drinkers.

The Sheffield Alcohol Research Group, commissioned by the Welsh Government in June 2017 to update a 2014 appraisal of the likely impact of a range of minimum unit pricing policies, concluded a minimum unit price set at between 35p and 70p would be effective in reducing alcohol consumption among hazardous and, particularly, harmful drinkers.

75% of alcohol drunk in Wales consumed by 22% of the population, report says – Guernsey Press

Important new report on alcohol and the emergency services from UKCTAS collaborators at the Institute of Alcohol Studies!

END_OF_DOCUMENT_TOKEN_TO_BE_REPLACED

The Government’s current alcohol guidelines are unrealistic and largely ignored because they have little relevance to people’s drinking habits!

Leading researchers from the UK Centre for Tobacco and Alcohol Studies, which includes the University of Sheffield’s School of Health and Related Research (ScHARR) and the Institute for Social Marketing at the University of Stirling conducted focus groups to see how the current guidelines were perceived by people aged between 19-65 years-old and from varied socioeconomic backgrounds.

The findings, published yesterday (5 August 2015) in the journal Addiction, show that the guidelines are generally disregarded as the daily intake suggestions are deemed irrelevant in a country where most people don’t drink everyday but may drink heavily at the weekend.

The results also revealed that people think the recommended quantities of drink are unrealistic, as they don’t recognise that many people are motivated to drink to get drunk. END_OF_DOCUMENT_TOKEN_TO_BE_REPLACED